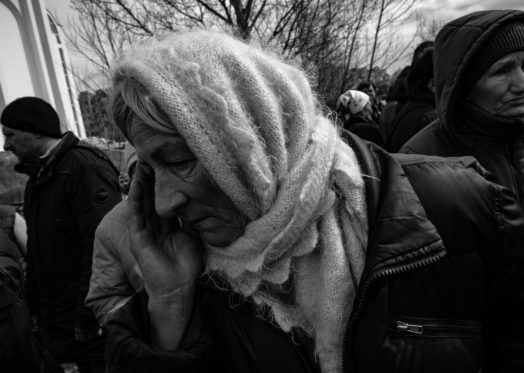 Day after in Kyiv. A week after Russian tanks and troops withdrew from the northern suburbs, the city slowly returns to a semblance of normalcy. Displaced people begin to trickle back. Sirens are rarely heard. Some hotels, stores and restaurants have reopened. Teams of workers clear the streets of debris. But now that the guns are silent, the horror of war comes to the surface.

Yesterday I was in Bucha, where the mass grave dug in the garden of St. Andrew's Church returned 67 bodies. Relatives stood petrified in the cold rain, as the black bodybags were laid in rows on the ground and partly opened: clinging to the arm of her granddaughter an old woman stared at the corpses trying to recognize the features of a deceased. Further on in Borodyanka other bodies were extracted from under the rubble of a bombed building. “First they attacked with planes” says a man who looks at what’s left of his house, demolished by multiple strikes. “Then the soldiers arrived and started shooting. The most ruthless were the Chechens”.

I drive west of Kyiv in a desolate landscape: razed houses, collapsed bridges, tank and armored vehicle carcasses, charred cars, overturned trucks, bombed factories and gas stations, abandoned Russian posts, trenches full of ammunition and food rations. You have to pass checkpoints, go through muddy lanes in the woods to get around the breaks on the main roads, gutted by rocket explosions, covered with shrapnel and metal scraps. You breathe in the smell of gasoline and burnt plastic. In the cemeteries the dead are buried. In the houses people return to collect what has not been destroyed, looted by soldiers or stolen by looters.

In this hardened wasteland appear men pushing bicycles on which they have loaded their belongings. Some emerge from the shelters and the cellars where they have taken refuge for weeks, living like rats without heat or water, by candlelight. Stray dogs, cats and chickens roam among the crumbling buildings in abandoned villages where the Russians have made scorched earth, sowing death and terror. The mayor of Makariv, dressed in combat uniform, says many of the 133 civilians killed in his district bore obvious signs of torture. The frontline was just outside this little country town.

A few miles to the north the village of Andriikva was a forward base of the Russian special forces. The streets and the backyards are littered with crates of ammunition, hundreds of tank shells, Uxos, rockets and unexploded bombs. An elderly couple is sitting on a bench in front of a destroyed home, staring at the unspeakable devastation. Forced to retreat, defeated by fierce Ukrainian resistance, the invading army took revenge on the civilian population. A woman was raped by five soldiers and then brutally murdered.

Every day new corpses are found: the smell of rotting corpses is the clue that guides the searchers. This morning two bodies emerged from the cesspool of a bombed gas station near the village of Bozova.

In the meantime the war continues: in Mariupol, in Cherson, in Mykolaiv and in the Donbass, where Russian forces are gearing up for a new powerful offensive.