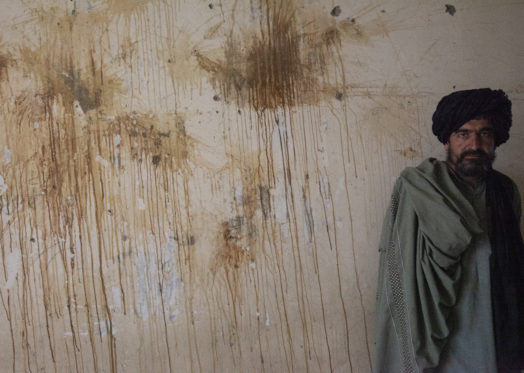 In February 2010 a combined force of 15,000 ISAF and Afghan troops launched Operation Moshtarak, the largest military offensive in the Afghan war. The goal was to remove the Taliban from Marjah, their last stronghold in central Helmand, and mark “the start of the end of the insurgency”. Indeed, the 10 months bloody battle, filmed by a HBO crew embedded with the US Marines (Bravo Company, 1st Battalion, 6th Regiment), marked the end of the illusions. When Nato soldiers withdrew, the Taliban quickly regained control of the district, prompting the Obama administration to review the Pentagon’s “surge” strategy in favor of a gradual deescalation. It was a major turning point: the stunning awareness that the war couldn’t be won.

I went to Marjah to see what’s left from the past and what the present looks like.

The road follows a badly damaged irrigation canal built at the time of the last afghan king, Zaher Shah, and turns southward in a flat land of wheat and poppy fields: barefoot children bringing the sheep to graze, armed men manning the check points, Islamic Emirate’s flags waving on police stations and on top of a large former US military base.

Marjah is still a battleground. UXOs and mines never stop to kill and cut limbs, as I could see at Lashkar Gah’s Emergency Hospital. The bazaar is partly destroyed and the remaining shops are riddled with bullets. Heavy weapons’ fire has smashed through the roofs of mud houses. The school, hit by mortar shells and missiles, has never reopened.

The clinic has only one doctor, Nakibullah Mohammed Naim, and two nurses who do what they can with the few medicines available, stacked in bulk on a dusty wooden shelf: aspirin mixed with tuberculosis tablets. The walls bear the marks of machine gunfire, the window panes have shattered, the bathrooms don’t work, there are no beds and no electricity.

“We don’t have antibiotics” laments Dr. Nakibullah. “And we don’t have water to wash our hands. The water for the delivery room, a crib, a bucket and a plastic basin, is a greenish liquid drawn from a canal a kilometer away. Severely malnourished children are plentiful, but all the nurse can do is measure arm circumference and note a log.

Hayatullah, a farmer, remembers well the day of the first American air raid in 2006. He was 8 years old then. The Afghan army was combing the bazaar under fire from the Taliban when a fighter jet flew over the country, dropping a missile. Hayatullah lost his grandparents, uncle, three sisters and two brothers; two other brothers and his mother were seriously injured. His father was saved because he was working in the fields.

“We’re peasants” he says. “We have some land where we grow wheat and opium poppies. A kilo of wheat is worth half a dollar, while a kilo of opium is worth 100. Last year we produced 28 kilos, but the costs are high: we have to irrigate every five days and use solar panels to draw water from the wells, which are getting deeper and deeper. We are very poor. We eat bread, yogurt, some beans and vegetables. I can't give my two children rice, meat or fruit. They cost too much”.

Lal Mohammed, one of the village elders, offers me homemade bread and tea. “Every family used to have chickens” he says. “But a couple of months ago a bird flu epidemic broke out and all the animals died. Our main problem today is the lack of water: the irrigation canals are dry or damaged. With the Taliban we have more security, but poverty is increasing day by day and schools are closed because they are destroyed or because there are no teachers”.

As the sun sets it’s time to drive back and the farmers in Marjah bid me farewell with an old Pashtun saying: “You can die for something, but you can’t die for nothing”. The Americans, they claim, have spent billions of dollars destroying Afghanistan but have done nothing to help. “The money for schools and hospitals was pocketed by corrupt rulers in Kabul. For us, there were bullets and shells”.