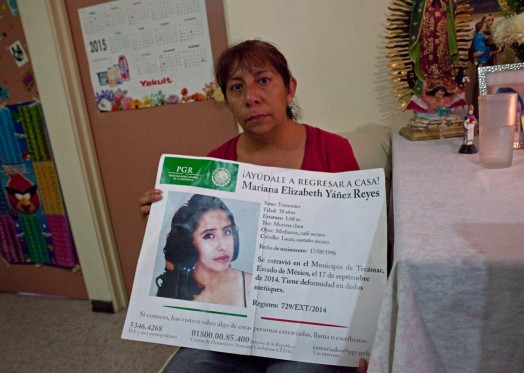 Day after day newspapers and social networks relate of murders, assaults, kidnappings, bloody clashes between rival drug cartels. And everyday new narcofosas, or mass graves, are unearthed: this time in Acapulco, with hundreds of corpses and rotting human remains. But almost nothing comes out from Estado de Mexico, the huge overpopulatd suburban belt of the federal capital. Unthinkable gaps cut off the posh and relatively safe downtown neighborhoods of Coyoacan and Zona Rosa from the broken barrios at the edge of town: dreadful places such as Ecatepec, Nezahualcoyotl, Chimalhuacan, Itzapalapa, Chalco, and many more. Boundless landscapes of dust and concrete bricks where millions live in poverty and fear under the ruthlessy enforced laws of the organized crime. Impunity is the rule, drug lords run the business and the police goes along: you can step into a grocery and ask for a gun, or hire a sicario, a killer, for less than six hundreds bucks. Feminicides are also on the rise. Twenty one bodies, 16 of young women, have been recently dredged from the Rio de los Remedios canal in Nezahualcoyotl. Human limbs and corpses are regularly found amid the rubbish in the hellish El Bordo landfill. But a crafty cover-up is systematically implemented. Mexico City’s glamorous look – at least this! -must be protected to keep luring foreign investors and prop up the federal government’s bankrupt economic and security records: so the authorities downplay the events, media coverage is deterred, journalists are threatened, paid off or outright killed with a bullet in the head. “We are left alone” says Guadalupe Reyes, whose 18-year old daughter Mariana is desaparecida since september 2014. “Nobody helps. And nobody cares. Mariana was such a nice girl. She went out one evening to make some photocopies at the shop across the street and never came back”. Months later, at Guadalupe’s insistence, the police handed her a piece of paper and some bone fragments. “They told me that’s it: this is what’s left of your daughter. It’s a lie. I managed to have the bones DNA tested: they don’t match, they don’t match at all! So I am still waiting, still hoping to see Mariana alive”.