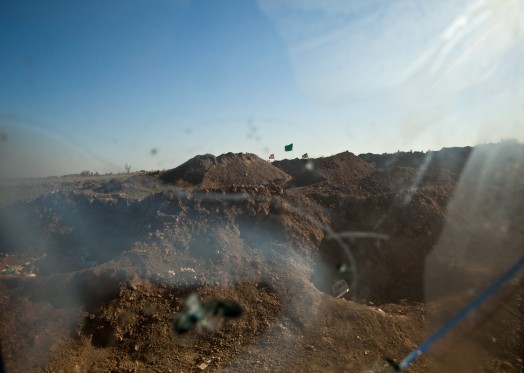 Stuck in the muddy banks of the Euphrates river, ducking in long trenches with guns and mortars at hand, and with just a few wind-swept tents to rest between the battles, the Shia fighters of the Ansar al-Marjia Brigade are holding ground. Only the red and green banners portraying imam Hussein’s grim face distinguish them from the warriors with the black flags of the Caliphate, some two miles away. You can hear their voices on the portable radios, as clear as you can the blast of their rockets.

Here in the outskirts of Fallujah, 30 miles west of Baghdad, positions on the field are constantly shifting. Suq Naz market, now a ghost village, bears the scars of Daesh’ brutal occupation: charred trucks, burned out shops, unexploded mines. Driving along the frontline on a battered American armored vehicle we pass by flattened buildings, abandoned farms and scorched palm groves. “The enemy is strong” says the Ansar’s commander, Sayed Hamid al-Yasiri. “They are well armed and ready to die”. Sayed Hamid’s Brigade was mobilized by a fatwa of the ol’ man of Najaf, Grand Ayatollah Ali al-Sistani, the supreme Shia spiritual authority, after Mosul fell to the Caliphate in 2014 and the Iraqi army melted away. The Ansar and about fifty Iranian-sponsored Shia militias are now in charge of defending Baghdad: they are in fact the only organized forces willing and capable to challenge Daesh on the verge of the capital and on the many fronts of the war. But the growth of increasing independent militias at the expense of the regular army is undermining the functions of the Iraqi government, already weakened by political squabblings and sectarian resentment, and struggling to cope with the collapse of oil revenues and the soaring numbers of refugees from the battle zones.