No more fun in Acapulco 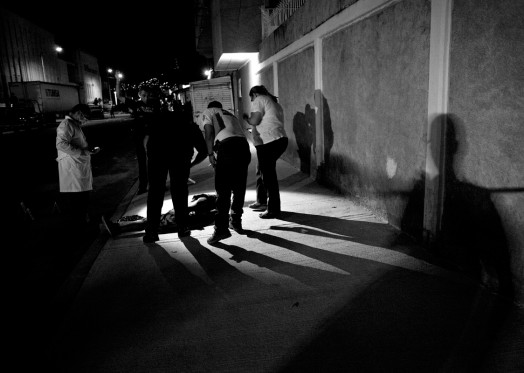 When my phone rang last night at 10 p.m. I knew why Paco was calling. “It’s downtown in Urdaneta. Make it fast!” I grabbed my camera, ran through the empty alleys to the avenida Costera and jumped into a taxi. It took barely fifteen minutes to get there. I couldn’t miss it: the marines and the forensic staff were already there, flashing red and blue lights on the concrete walls. The air was thick and hot. The guy was lying face up in a pool of blood.

It’s hard time in Acapulco, where sicarios roam the streets and kill for less than 50 bucks. Long gone are the good ol’days when tourists and Hollywood celebrities flocked to the “Mexican paradise” on the Pacific shore. Now in the hillside slums that ring the city the police is finding mass graves, young girls’ bodies chopped into pieces and severed heads in waste buckets with hand-lettered signs from drug gangs.

Guerrero state is the country's largest producer of raw opium and the port-city of Acapulco is the main transit route for the heroin bound to the Usa. But since the death of the “Boss of Bosses” Arturo Beltran-Leyva and the arrest of El Chapo Guzmán of the Sinaloa Cartel, it has been fought over by dozens of out-of-hands and increasingly brutal criminal gangs.

The fragmentation of the criminal organizations has fostered the blossoming of a galaxy of armed groups resorting to kidnapping and extortion to create additional revenue: last week an old street vendor who couldn’t pay a 40 pesos cuota (two dollars) was shot in the head and left dying on the sidewalk.

Acapulco is now ranked the most violent city in Mexico and among the most violent cities in the world, with homicide rates above 100 per 100,000 people each year. Guerrero has been blood-soaked with 1,170 killings in 2015 and 1,656 in the first nine months of this year, of which 774 in Acapulco.

I felt a chill in my back when the ambulance carried the guy’s body away: the marines left in a rush and I found myself alone in the dark. I walked swiftly towards the Costera, sniffing at the shadows of the night. I finally sat sweating in a broken down bus with roaring loudspeakers. Then the phone rang again.