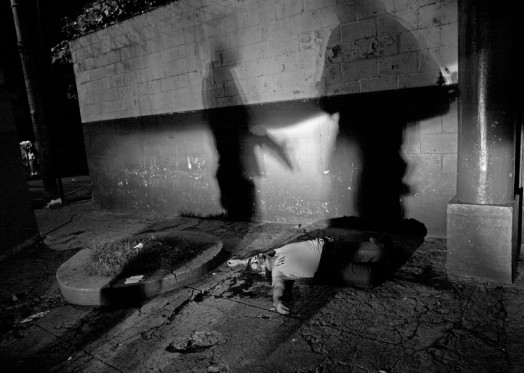 San Salvador is a place where even a shoe brand has a gloomy meaning: a pair of worn out Nike sneakers hanging from a lamp post hints you’re crossing into Mara Salvatrucha’s turf; a line of shabby Adidas swinging from a suspended electric wire warns you are entering a Pandilla 18 stronghold. Other sinister signs, painted or carved on the walls, mark the the local clica’s hunting grounds: a cross, a nickname, a skull.

“Letras o numeros?” In the barrios you can’t escape: you belong either to the MS or the 18. And there’s no need to ask. They know who you are. They know that if you cross the line you’re either a killer or a dead man, or both. The sentinels, young boys and girls with a cellphone on hand, are quick to sound the alert. And the sicarios are eager to strike.

These days in the barrios gun shots ring out day and night. Bodies keep flooding in at the morgue, sometimes dismembered or cut into pieces: women, toddlers, policemen, soldiers, bus drivers, drug dealers, bystanders and pandilleros in their 20s, with tattooed faces and squandered lives.

With roughly one killing every hour murder rates have soared at levels not seen since the civil war of the 1980s: by the year’s end the toll – now set at 6,200 muertos – will easely reach 7,000, overtaking Honduras as the highest in the world (not including battlegrounds like Syria).

The current mayhem was sparked by the collapse early last year of a two year long truce between the gangs, which had been supported by El Salvador’s left-wing government: the truce considerably reduced the murder rate but was widely unpopular and was denounced as a “pax mafiosa” by the opposition. Facing an election, the government reversed course and now backs a mano dura (iron fist) approach that has so far made matters much worse.