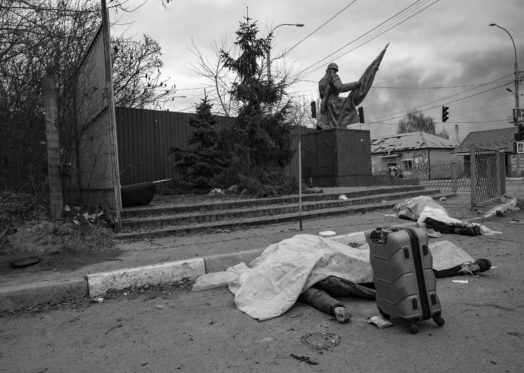 A mother and her two kids. Their bodies on the twisted asphalt, a blood-soaked hand and a sneaker protruding from a sheet, their small trolley standing among them as an ominous warning: they are shooting at children, at refugees running for cover. The bodies were finally carried away, but the trolley was left behind, amidst the debris and shrapnel scattered at the blown up bridge on the infamous Irpin frontline. I can only guess what’s inside: a few hastily grabbed clothes, a family portrait, maybe a toy or some food.

People are coming on foot, pushing buggies, dragging suitcases, fleeing shells, driven by terror. Some are weeping: most are silent and never look back. We hear the thunder of explosions, gun shots, Grad rockets roaring overhead, close-range mortar fire. We see the burning roofs, pitch black clouds of smoke rising to the cold iron sky.

No one knows how long it will last. Meanwhile, in the snow and bitter cold, Ukrainians are digging fox holes in the woods.

Two miles back at a heavily guarded block post ambulances and civil defence personnel provide first aid to the refugees. The old and sick are exhausted. A child who lost his parents is crying desperately in the arms of a nurse: he is alone, his gaze locked in emptiness and fear.

In the city, the defences are being strengthened for the final battle. All men between 18 and 60 have taken up arms. In the barricades women are filling petrol bottles. The military are setting up machine guns and anti-tank concrete barriers. Foreign fighters are pouring in by the hundreds to help with the fighting. Hospitals prepare to treat the wounded. Surrendering is not an option: everybody is ready to die.

In the chapel of a nearby cemetery where a rocket has just hit the tombs, a priest is officiating at the funeral of a fallen man. “He was a friend of mine” he says, and starts to walk around the uncovered coffin reciting Orthodox prayers and swinging the incense thurible. Anatoly Morovoz, 54, fought alongside the Russians with the Red Army in Afghanistan: by the Russians he was killed, at the Lavina Mall block post, a strategic crossroad north-west of Kyiv.

Only his younger brother is attending the service. Then three former comrades arrive on the scene: veterans of the Afghan war carrying bouquets of flowers. And a woman who gathers in silence for a few moments. Then moves away, wiping her tears. “We don’t need food” tells me Anatoly’s brother. “Give us weapons and a no-fly zone!”