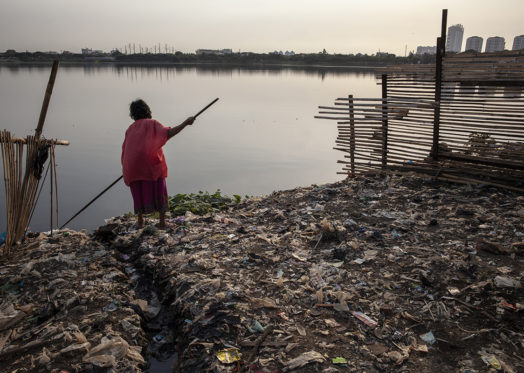 Armed with a bamboo stick, an old woman in a pink robe steps out of her wooden shack on the Pluit lagoon and stumbles through the thick garbage layer leading to the water. “It’s my balcony” she jokes. “But I must constantly keep the drains open with this stick or I’ll be drowned by the waste”. The mostly plastic/rubbish embankment is also a makeshift floodgate against the rising ocean.

I spent a few days walking the narrow streets of north Jakarta’s crammed slums, sharing tea with fishermen, crawling on suspended alleyways, sitting under tin roofs with bunches of grinning kids, worried mothers, unemployed dads. In the shadow of the new lavish high rise buildings, the poor endure in miniature shanties of cardboard and metal scrap: they are the ones who are most affected by the sinking of the 10 million megacity. This part of the town is going down at an alarming pace: 2.5m just in the past decade, and continues to subside by as much as 25cm a year. Elsewhere rates range between 2cm and 15cm a year.

The government has embarked in a controversial 40 billion dollars project dubbed the Great Garuda: a giant outer sea wall across Jakarta Bay and an archipelago of 17 artificial islands in the shape of the mythical Garuda bird, the country’s national symbol. It will take years to complete and even if the network of dykes and reclaimed land could prevent sea floods, it won’t stop the overall subsidence of the city.

According to a Bandung university’s research, by 2050 about 95% of north Jakarta will be submerged. In the Muara Baru district flooded factories and buildings have already been abandoned and a deserted mosque sits in the stagnant saltwater. In Marunda, Angke, Pluit, Ancol and Cilincing I met people struggling to fend off the stinky water. They build sandbag walls on the shoreline. They erect stilt houses on bamboo poles. Thet dig trenches of garbage on the lagoons, along the rivers and the filthy canals. They live with their feet in the water, but drinking water is not easily available: 20 litres barrels are brought in the slums by pushcarts, and must be purchased.

It’s election time, but sadly none of Indonesia’s huge environmental challenges (climate change, erosion, deforestation, mining, floods, land grabbing, rivers and ocean pollution) has been addressed. When an occasional all-smiles politician shows up on ballots day in Muara Baru, he shakes hands and makes the usual promises. But it starts raining: as he’s hastily escorted to his service black limo, barefoot children run for cover under plastic sheets.