Boxe in the slum 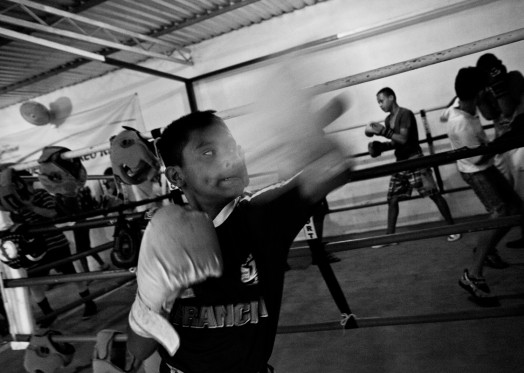 I spent a week trying to find a bright spot in Caracas, but beside the warm cordiality of the people I only ran across the crumbling landscapes of a failing state: kids eating garbage from the streets, empty stores, rising prices, queques for everything outside the shops, hospitals desperately short of drugs, corruption, black market’ sharks, water rationing, armed thugs, angry demonstrations, rampant crime. Until I went to Petare.

The sprawling hillside rancho in east Caracas is not an easy place to go. Gangs of angry young men fight for the turf and the crack, spilling blood on the ground. Hunger and misery bleed from the derelict brick dwellings and a somber, venomous mood hangs in the air. There’s no sign here of the squandered oil bonanza of the past: the Bolivarian revolution is a long-gone dream, fading on the walls with its dumb rallying cries.

Danilo, who lost his 19 years old son in a shoot-out, leads me through the narrow paths of La Montañita, Petare’s most violent barrio, and up a concrete staircase to the upper floor of a run-down building where two dozens boys and girls are training. It’s a boxing gym, the Escuela de Boxeo Ruza. Shoes, shorts, gloves and ring have been provided by a local businessman. Inspiration came from Jairo Ruza, a former professional fighter who managed to raise the money, establish a no-profit Foundation, hire a couple of trainers and a smart secretary (his daughter).

“This is a dangerous environment” says Jairo. “The streets are filled with weapons, junkies and drunkards. These kids come from a sunken background: broken families, vicious fathers, alcoholic mums. Some are orphans, many dropped out of school. We need to get ‘em out of the streets quickly, before it’s too late”.

The gym tends to 86 young boxers, 5 to 14 years old, and they all seem to be happily (and seriously) involved in the game. They’ve got nothing else in the slum. Sometimes during a break a few of them stare at the empty window with a tearful look; but they are soon back on the ring. “We don’t teach just boxe” says Jairo. “We teach how to follow the rules, how to care of yourself, how to help and respect each other. This is our goal”.

I felt much better when I left Petare.