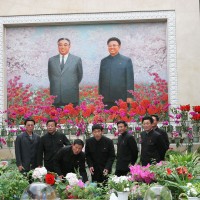 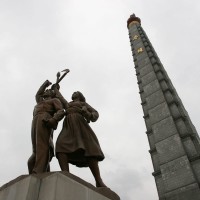 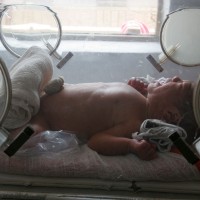 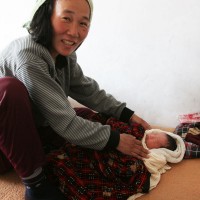 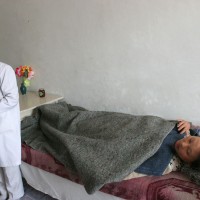 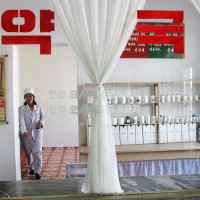 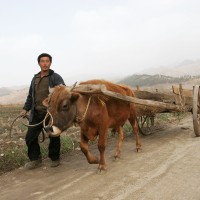 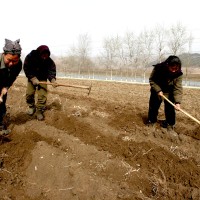 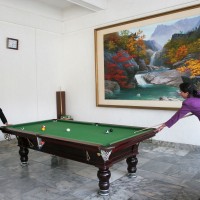 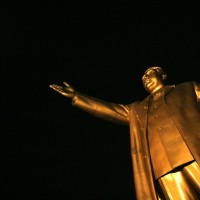 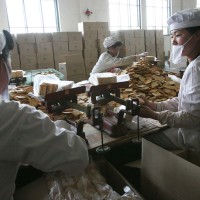 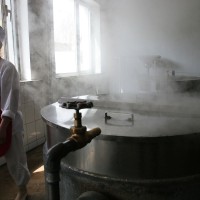 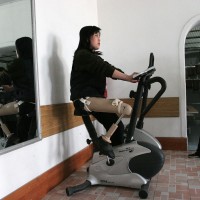 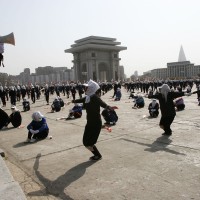 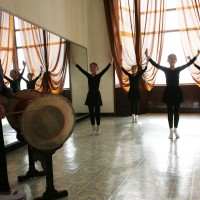 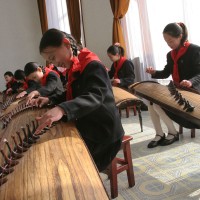 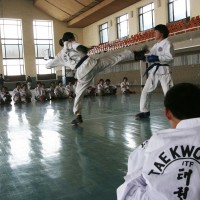 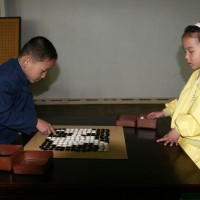 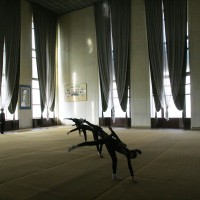 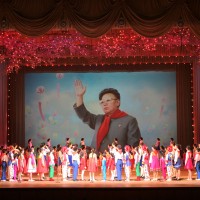 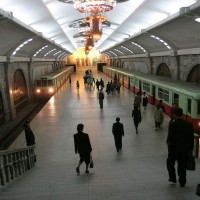 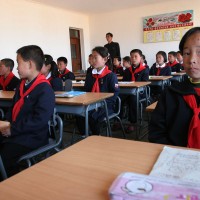 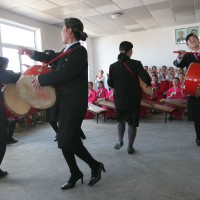 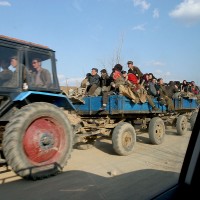 A journey across the Hermit Kingdom

The ancient Ilyushin of the state owned airline Air Koryo, which flies twice weekly from Beijing to the North Korean capital, is a time machine. In the most inaccessible, most mysterious, most isolated country in the world, where even George Orwell would feel lost, the clocks stopped on the morning of 27thJuly 1953, when the representatives of the United Nations, China and the Democratic People’s Republic of Korea (DPRK) signed the Panmumjom armistice which ended three years of cold blooded massacres. The effects of the technological revolution, the capitalist market and globalisation have not touched the last outpost of the cold war. Behind the bamboo curtain, 23 million men, women and children are waiting for an American invasion. They are preparing to fight the final battle in a war that, legally, has never ended.

Seen by night from the satellites and the Pentagon’s surveillance planes, the DPRK is a black hole: a dark mark surrounded by the bright lights of the Chinese and South Korean towns and cities. As you approach it appears less gloomy, at least in Pyongyang, the showpiece of the ‘workers’ paradise’ and the compulsory starting point of the first official visit of an Italian journalist.

Mrs. Kim and Mr. Toh, kind but inflexible workers from the Ministry of Information, accompany me everywhere and the programme, planned down to the last detail, cannot be modified in any way. For example, I am not allowed to leave the Moranbong Hotel alone, where I am provided with a spotless room equipped with a television which transmits reassuring images: children playing the flute and zither, incredibly talented, dressed like living dolls; and Kim Jong-il, the Dear Leader, inspecting troops. News from the outside world: non existent. The September 11th attack was announced a week after the event.

Pyongyang, built on the banks of the Taedong river, is like a futuristic city of the 1950’s: wide tree-lined avenues, immaculate squares and parks, geometric concrete buildings. The architecture underlines the success of the regime. The bronze statue of Kim Il-sung, the Sun of the Nation, stands 45 metres high: the Great Leader, Father of the Nation and of the present Secretary of the Korean workers’ party and Supreme Commander of the Army, died in 1994, but has been declared President for Eternity. The awe-inspiring Juche Tower, 170 metres of granite, represents the absolutist hierarchycal ideology that penetrates the North Korean society: a unique mixture of nationalism, economic self sufficiency and Confucianism which seems to follow, with a religious fervour, the old maoist teaching “you must count only on your own forces”.

In an imposing Exhibition Centre there is a never ending collection of bizarre flower arrangements in which only two species have been used: Kimilsungia, a lilac orchid named after the Great Leader by the Indonesian President Sukarno in 1965, and Kimjongilia, a red begonia created by a Japanese horticulturist on the occasion of the 46th birthday of the Dear Leader. Schoolchildren on their school trips kneel before the portraits of the two Kims.

The roads are semi deserted. At the crossroads attractive policewomen in immaculate uniforms direct the traffic of bicycles and pedestrians with robot like movements. There are very few cars, although Mr Toh assures me that the number of cars is on the rise and in December 2003 the first advertisement appeared on the road leading to the airport, in which a Huiparam, “the Whistle”, a sedan produced using Fiat parts imported from South Korea and built in Nampo, is highly praised. Price: 8,000 euros, an enormous sum of money when compared to the average wage of 20 euros a month.

The city streets begin to bustle early morning, when the loudspeakers installed on the lampposts and in all the houses in the Hermit Kingdom (each also possessing an air raid shelter) emit shrill renderings of patriotic anthems and encourage the population to continue building a socialist state. Workers from all walks of life and students set off walking, often covering many kilometres, or patiently wait in silent, tidy queues for a the occasional ancient bus, the second hand trams provided by East Germany before the unification or the trains in the underground stations, bomb proofed against atomic attacks and decorated with celebratory mosaics.

In the afternoon the squares fill with young people. After school, the best and most deserving join in the daily training sessions to prepare them for the next Arirang Mass Games: spectacular muscular exhibitions in which more than 100,000 athletes can take part (preparations for the last edition required the equivalent of 200 million working hours). In the parks, in the area surrounding the Museum of the Revolution and in front of the May Day Stadium, thousands of youngsters train incessantly, guided by their instructors who give orders through loudspeakers. The games are a plastic expression of the ideals of the regime. In order to obtain perfect synchronization and refine the movements that bind the group together, the individual must give up his personal identity: the mass must behave as a single organism, obeying without question the instructions conferred.

And this is also a means of keeping the people on the alert and mobilize a country which feels surrounded, excluded from the international community and in the sights of George W. Bush (who has included it in his Axis of evil).

Kim Jong-il has launched the “songun chongchi” policy: the military first. The whole society is mobilized and organised giving priority to national defence: in fact more than a third of the national budget and a large part of the 22 billion dollars GNP are spent on this. Compulsory military service lasts for between 6 and 10 years. 1.1 million soldiers are on active duty, with another 4.7 million in the reserve and 120,000 men and women in the Special Forces, the biggest in the world. The 75 divisions of the Army, mainly positioned along the 246 kilometre DMZ between the two Koreas, have at their disposal 13,500 pieces of artillery and missiles, 5,800 tanks and armoured vehicles, 26 submarines, 780 Mig aircraft, 300 combat helicopters. The war industry is the only developed sector in the country’s economy and the only one that provides some hard currency through the export. Whereas the nuclear programme, alongside the research of the possible uses for civil purposes, has already begun moving towards the production of arms: on February the 10th the DPRK announced that it had already produced several atomic warheads and, according to American sources, is preparing for its first underground test.

Is this a real threat or a complex, risky strategy to weight the odds in the diplomatic cat vs. mouse game with the West? In absence of any evidence, we can only theorize. The former CIA head of station in South Korea, and later ambassador to Seoul, Donald Gregg, has admitted that intelligence in Washington is groping in the dark and has defined the DPRK as “the biggest failure in the history of American espionage.”

Certainly the hard line taken by the White House has not yielded results. The Clinton administration was working on an agreement that foresaw the freezing of plutonium production in exchange for oil and civil nuclear technology. By refusing every bilateral confrontation, Bush has forced Pyongyang into a corner, speeded up the re-arming process and strengthened the monolithic regime of Kim Jong-il, in which there is no sign of a crack despite the obvious economic troubles.

After sundown the capital empties and sinks into shadow. Lights flicker only by the monuments and government buildings, tourist hotels, houses in the diplomatic zone, the casino in the basement of the Yongakto Hotel where the few foreign clients at the roulette tables kill the night boredom with imported whisky and Chinese entraîneuses. The lack of electricity - and of heating - is a huge problem in winter, when temperatures of  -20° Celsius are common and the only fuel available is timber: whole forests are chopped down and so, in the spring, young pioneers wearing red neckerchiefs plant millions of fast growing trees. In the countryside even lorries use wood as fuel, thanks to an ingenious system of steam power applied to the engine.

Outside Pyongyang we travel through a country that has gone back to a pre-industrial era, through a landscape littered with observation towers, anti aircraft positions and bunkers hidden on the mountain slopes. Many districts are off limits: military zones, some probably housing prisons and re-educational camps. The roads are unmade and the short sections that have been tarmac-ed are used as landing strips for the Migs. The downfall of the Soviet Empire, the lack of spare parts and investment, the collapse of the transport system have all led to the downfall of the heavy industry, the old backbone of the economy. Only 14% of the land is good for agriculture; and this, together with the floods and the famines of the 90’s (one million dead), have obliged the government, against its will, to accept international aid.

“Every day” says Richard Ragan of the WFP “we provide 6.5 million rations of highly enriched food, which are distributed through the state distribution network. It is an essential integration: the 400 grams of rice that the government provides are not sufficient at all”. According to Pierette Vu Thi, the UNICEF representative, malnutrition rates have gone down from 60% to 40%, but they are still alarming. “The reasons of our sufferings are the present US sanctions and the imperialistic politics in Washington” my guides recite, while pointing out DPRK’s achievements in the social services: free houses and medical care, 99% of the population are literate, free pension schemes, no taxes, AIDS and crime nowhere to be seen.

But in the far Eastern province of Wonsan, the only maternity hospital, with 250 beds, was built with Italian help. And in nearby Pangsjo county, according to Ri Yong Kil, a party delegate, the only tractor was donated by Cesvi, an NGO based in Bergamo (Northern Italy) which is presently engaged in helping seven agricultural cooperatives in that district.

Part of the humanitarian aid from abroad has been used to rebuild the schools and houses in Ryongchon, a town on the Chinese border, where the elders of the local council, while sipping rice liquor and chewing kimchi, fermented cabbages, reminisce about the horrific blast on April 22, 2004, mistaken by American intelligence for a nuclear test, in which the village was destroyed: 161 people died and 3,000 were injured when 2 trains loaded with ammonium nitrate collided and exploded.

Moving back towards Pyongyang, we see peasants and soldiers working side by side in the paddy fields surrounded by red flags fluttering in the breeze, and it is a reminder of China during its catastrophic Great Leap forward. Even so, in this hermit Kingdom, something is changing if Kim Chun Guk, an official from the Ministry of Foreign Affairs, tells that “we are sending groups of experts to Europe to study how Western economies work.” And in July 2002 Kim Jong-il himself dared to open a breach into the strict system of centralised planning. In fact the government has announced a series of innovative moves: the abolition of some subsidies to state owned companies, the reduction of price control, a partial adjustment of the exchange rates, permission for farmers to sell their surplus goods in informal markets. Suddenly wages have risen, although they still can’t catch up with the sharp rise in inflation, and consequently people are spending more.

At the market in Tongil, a suburb on the outskirts of the capital, housewives pay in cash, no longer with food coupons. On the stall which sells electrical goods there is everything, from flat screened televisions to DVD players, cell phones and MP3 players, although it isn’t clear who can afford these luxuries.

It is even more difficult to foresee the long term effects of this economic adjustments. The hardliners keep saying that “the DPRK will not follow the move towards capitalism like Vietnam and China”. But meanwhile, with the blessing of the Dear Leader, the first worrying (or welcome) cracks are starting to appear in the bamboo curtain.